You are at:Home»Capability»5 Ways to Find out if you have a Growth Mindset

There has been a growing buzzword in various fields such as in business and education in the last few years. It’s what Stanford Psychologist Carol Dweck coined as a “Growth Mindset”. 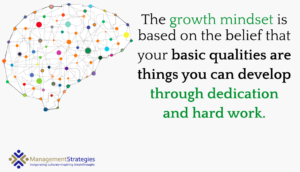 But what does this really mean? Do people with this mindset believe that anyone can be anything, that anyone with proper motivation or education can become Einstein or Beethoven? No, but they believe that a person’s true potential is unknown (and unknowable); that it’s impossible to foresee what can be accomplished with years of passion, toil and training.

So how does one cultivate this mindset? The first step is to gain an awareness of when we are working with a fixed mindset or a growth mindset – and this may vary per situation. Carol Dweck herself recognizes that everyone is a mixture of fixed and growth mindsets. You could have a predominant growth mindset in an area but there can still be things that trigger you into a fixed mindset trait. So in order to continuously develop the growth mindset, we must become aware of our fixed mindset tendencies and we can do that by bringing our awareness to our thoughts and internal language when faced with these 5 scenarios.

Scenario 1: Talking with someone

A person with a fixed mindset when talking with others is constantly trying to prove themselves to the people they are talking to. This can be detected by people who are out to impress others using the words they say and the answers they give. In other words, a person with a fixed mindset will tell you what they think you want to hear. This is because their every action is a call for confirmation of their intelligence, personality or character – will I succeed or fail? will I look smart or dumb? will I be accepted or rejected?

This is critical to understand and detect because as we will see, the act of “proving oneself” is a dangerous loop that a person with the fixed mindset may repeatedly fall into. 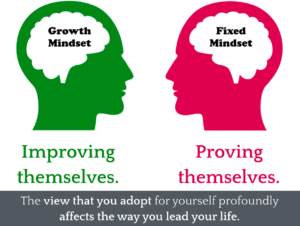 Meanwhile, a person with a growth mindset will ask a lot of questions. They take time to respond because they give their response a lot of thought. They will show a genuine curiosity about people and organizations because they are excited to learn and they believe that the one of the most effective ways to do this is to simply listen to the people around them. For these people, there are no “stupid” questions and they don’t have fear of asking powerful and challenging questions because they are not proving themselves to you but are rather looking for room for improvement for themselves and the organizations they work for. 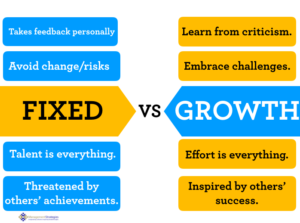 Scenario 3: When faced with a difficult task or challenge

When faced with a new task, or a difficult one, a person with the fixed mindset will doubt themselves and allow that feeling of doubt to creep in and fester. They will talk to themselves and say things like: “Are you sure you can do it? Maybe you don’t have the talent.” or “I can’t do that.” And when they slip or encounter a failure within the process, they would react either by putting blame on other people or external factors, by getting angry at someone or at themselves by saying “I knew I wasn’t good at this.” and “I knew I was going to fail, anyway.”

A person with the growth mindset will have some doubts, but they will overcome that self-doubt by saying something like “I’m not sure I can do it now but I think I can learn to.” and because of this internal language, the behaviors that follow are that of finding ways to overcome the challenge either by researching, rapidly iterating and making mistakes, finding a mentor, asking questions and just springing into action and making tiny, constant improvements each time.

Scenario 4: In times of failure

How will a person with a fixed mindset react when they fail? By blaming someone or something or by getting angry. Or both. For them, failing is a weakness. Making mistakes is unacceptable and embarrassing. This is because status, position, power and prestige are important for people with a fixed-mindset. As a result, when a fixed minded person fails, they say things like “I’m such a failure” and in the process, allow the failure to define their persona.

A growth-mindset person may still feel disappointed, sad and ashamed at times when they make mistakes and fail. However, they are much quicker to bounce back because they are able to look at the entire process objectively and accurately pinpoint specific points of improvement that they can work on to avoid making the same mistake all over again.

Scenario 5: In times of success

“I’m the best.” “I’m a genius.”, “I deserve this.”, “I’m blessed”  and “I worked hard for this.” are just some of the things that a fixed-mindset person would say to themselves when they succeed at something. Fixed-mindset people would be the first to brag about their achievements, seeking external validation from their circles.

There is a silent confidence in a person with a growth-mindset, allowing their work to speak for themselves and any news about their success to spread naturally. The only thing they say to themselves is “I did well”. When they are praised and recognized, they acknowledge the person and thank them for the compliment. What’s more is that a person with a growth-mindset would be quick to recognize, show appreciation to and share the recognition with the numerous people who helped them achieve the success to begin with. 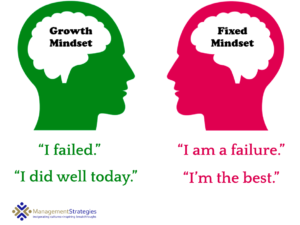 Developing a growth mindset is obviously much easier said than done. The good news is that listening to our internal voices whenever we encounter these five (5) scenarios is a good place to start.